You are here: About Us | News | Street Art at WVC 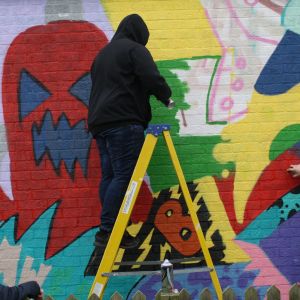 A small group of students where given the exciting challenge to graffiti walls in their school last week. Students were lead through the design and planning process, then instructed in spray paint techniques by Graffiti Artist and Illustrator Si Mitchell. The workshop culminated in the spraying of two large external walls at Witchford Village College.

The workshop was run as part of the College’s SPARK initiative, which aims to identify what makes each student tick, ignite their love of learning and raise their aspirations. It also served to enhance the students’ learning environment, as part of the school refurbishment project, and gave students ownership of this area.
The students involved, threw themselves into the project and came up with some great individual ideas. They then collaborated with their fellow students to pull the various designs together to form a cohesive plan for their walls. They were all very keen to get started on the spray painting, which was far more difficult than they all first thought. Once they got over their initial errors and had practiced the techniques Si had shown them, the wall art began to emerge.
We were extremely lucky to secure Si Mitchell for the workshop. He is a Street Artist and the current UK Illustration Champion. He has produced artwork for Green Day, McFly, BBC, YouTube and many more. The students found him to be very inspiring and motivational and were entranced by some of the stories he told them. ‘Awesome’ became the much used word of the project and the final walls definitely are awesome. This group of students will now use their acquired knowledge to roll out further workshops to inspire some of our younger students. 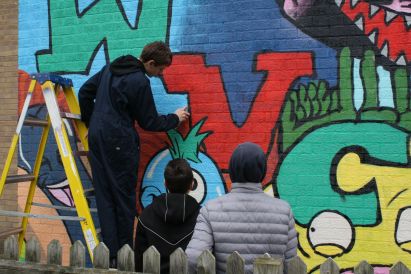 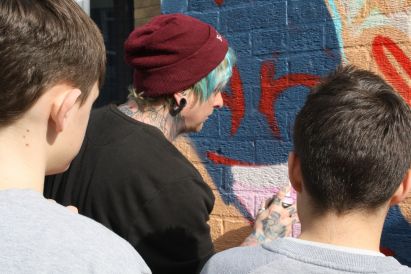 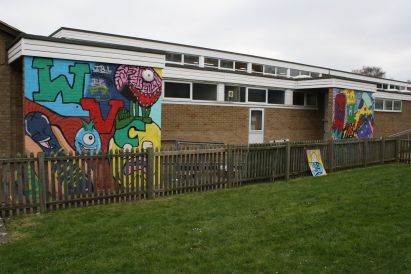