You are here: About Us | News | Oracy at WVC 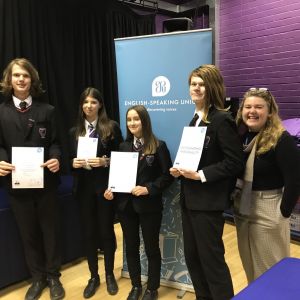 ‘Courage is what it takes to stand up and speak; courage is also what it takes to sit down and listen’, said Winston Churchill. The orators of Witchford Village College have certainly shown courage in recent months, having competed in school and regionally in a plethora of prestigious competitions.

In November, a group of Year 9 students were fortunate to participate in a public speaking workshop delivered by Peterhouse College, Cambridge. As numbers grew at ‘Oracy Club’, so did the public speaking skills of the students. In the final week of the Autumn term, three excellent orators (Adam, Alex and Will) spoke in front of their peers in assembly about their views on a range of topics, from transgender rights to celebrity culture.

The Poetry by Heart evening, held in January, saw KS3 and KS4 students deliver sensitive poetry recitals with impressive levels of accuracy and understanding. Thanks must go to Mrs Burley and Miss Owen for judging the competition. Will (KS4) and Stephanie (KS3) claimed book prizes and will go on to be considered for selection at the national round of the competition. Benjamin and Millie were commended for their fantastic performances on the night.

The English Speaking Union team ventured to Oundle School in recent weeks, to compete in the Churchill Speaking Competition. Grace and Sophie pushed themselves out of their comfort zones in their roles as Speaker and Questioner respectively, whilst Alex picked up the prize for ‘Outstanding Personality’ in his role as Chairperson: a unanimous decision from the judging panel. Adam joined the group as a reserve, posing a great deal of challenging questions to those competing.

We look forward to a visit from Lucy Frazer in March, and the subsequent trip to parliament for the ‘Debate Mate’ group. A huge well done to all orators!