You are here: About Us | News | Robotics Teams win Award at South of England Competition 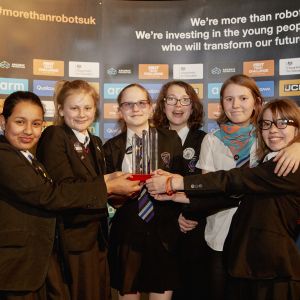 Witchford Village College robotics teams joined almost 500 students from across the South of England at the KingsGate Conference Centre in Peterborough to compete in the inaugural FIRST® Tech Challenge UK Championships. At stake was the opportunity to represent the UK at the FIRST® Championships held in Detroit, USA. The FIRST® competition is the world’s largest student robotics competition with 30,000 12-18 year old students competing across the globe.

For the two Year 8 teams from Witchford, a girls’ team ‘Creative Coven’ and a boys’ team ‘Metallic Omni-force’, this was the culmination of six months of hard work at lunchtime and after school. In the final push the teams were working until 6pm or later to be ready on time.

During the event the teams compete against each other within alliances, using their robots to complete a series of tasks on a space-themed playing field. Teams were also required to present engineering notebooks, documenting their journey through the programme, to a panel of industry judges.
The first phase of the competition is a qualifying section in which the twenty-five teams played a series of matches to establish their ranking and win a place in the top eight. Each of the matches was hard fought with a close eye being kept on the leader board. Despite some great driving the boys team finished 12th but even better the girl’s team finished 5th earning a well-deserved place in the final phase.

The final phase featured all the top teams and highlighted the huge age range of the competition with younger teams at 12 and 13 often competing against 18-year old A-Level students. Creative Coven once again performed superbly reaching the semi-final before being eliminated.

Although the overall prize (The Inspire Award) and place in the global final went to the St Christopher School from Letchworth Garden City the day ended very much on a high with Creative Coven being awarded the Collins Aerospace Award for the most innovative and creative robot design with Metallic Omni-force a well-deserved second.

The day was a great success for the young Witchford teams and bodes well for their future both in further robotics competitions and as young engineers. 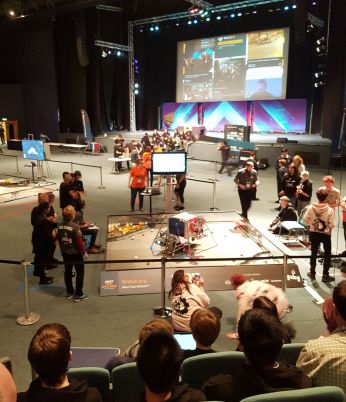 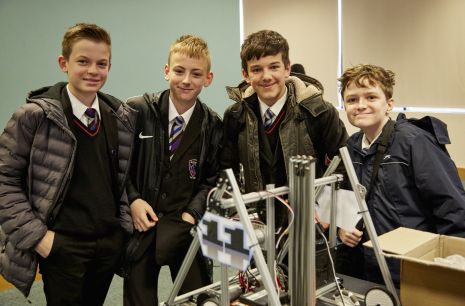