You are here: About Us | News | Strictly Kate 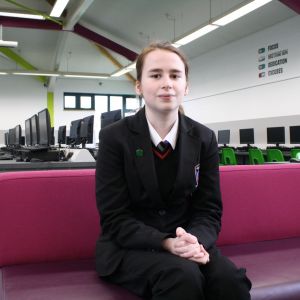 Our student Kate has been part of the ‘Strictly Come Dancing’ culture over the last few months. Kate is an avid fan and a walking encyclopaedia of the show. Whilst having taken ballet classes, she does not see herself getting into ballroom dancing. She is interested in the costumes and the glitz but says she is not a ‘girly’ girl. Her fascination is with the whole ‘Strictly’ experience, the way the show is made and the excitement of it.

Armed with her knowledge, she contacted Zoe Ball’s Breakfast Show on BBC Radio 2, to be part of their ‘Show and tell’ slot. Her application was successful and late in the summer she recited facts from the ‘Strictly’ 2017 show, live on Radio 2.

Her timing turned out to be fortuitous and Zoe Ball and her team were so impressed with Kate that they invited her back to the Breakfast Show to give her views ahead of the weekend ‘Strictly’ broadcast. This became a weekly event, whilst most students were dragging themselves out of bed for the last school day of the week; Kate was live on the Radio 2 Friday Breakfast Show.

Her experience did not end there. She has been to the spin-off ‘It takes Two’ studio and watched the live show broadcast. She found the whole process incredibly interesting and was there when the sound was lost on the live show. She has also been to the Radio 2 studio, meeting this year’s ‘Strictly’ finalists and asking them questions. She has supported ‘Team Dowzer’, Karim and Amy, but predicted that Kelvin and Oti would win. She cannot quite believe that she has met them all!

Kate says of the last few months; ‘It has been an incredible experience, I have watched the show since I was four. It was great to meet all the team at the Breakfast Show and I am not going to forget it.’ Whilst ‘Strictly’ season is now over, Kate has been asked to stay in touch, so watch this space! At WVC, we are very proud of Kate and the mature and grounded way in which she has handled herself and the situation. Many teachers have been tuning in to Radio 2 on a Friday morning and it has been a talking point in the school, well done Kate.